That’s what a filmmaker who helped launch her career titled a documentary based on her life. I won’t go so far, because I rarely come across people who put any credence into her line of thinking. That being said it does happen from time to time. It’s interesting to see some of the backstory on how she makes money.

Those who know me know I’ve been quick to say I agree with much of what she (and Dave Ramsey) tout, however it’s far from 100%. She has a lot of good things to offer the basic investor who needs some financial planning guidance, yet there are these other “things” that she makes money on which really make you wonder how credible she actually is. In all honestly, I’m about an 80% believer in her doctrine of fiscal responsibility, which is about where I’d put my thoughts on Dave Ramsey. For reference, I’d put my thoughts on Jim Cramer down there about 0%. 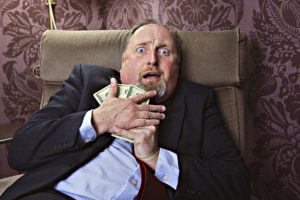 Jim Cramer should make anyone feel like this. Be wary of any financial advice from him!

Long story short she recommends ONLY hourly financial planners are worth their salt. We ARE indeed hourly financial planners, however for those investors needing regular ongoing advice and planning we’re also retainer based advisors and project based advisors and blah blah blah. Suffice to say she’s saying stay away from the commission based insurance and investment salespeople, which I generally agree with (though a select few of them are OK).

Part of the reason I left the brokerage world is I was disgusted with all of the hidden agenda’s, hidden fees, hidden expenses, tricks and traps and on and on. Suze pumping things she gets paid on isn’t much different (as with the case of SelectQuote etc.). You should always know exactly how your financial advisor get’s paid, if you don’t, give them this financial advisor interview questionnaire  and you’ll see quickly how they stack up!